Let us extend the method stated above to pentagon (5-sided polygon). Clearly, we can divide the pentagon into three non-overlapping triangles by drawing two diagonals. Since each triangle has an angle sum of $latex 180^\circ$, the angle sum of a pentagon, which is composed of three triangles, is $latex 540^\circ$. 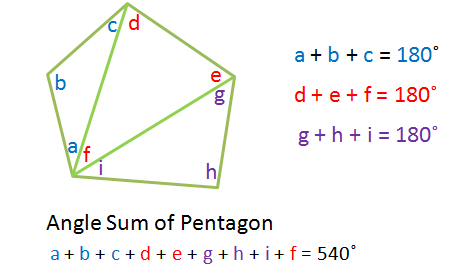 Using the method above, we can see the pattern on the table below. The sum of a polygon with $latex n$ sides is $latex 180(n-2)$ degrees. Next, we summarize the polygon angle sum theorem and prove it. END_OF_DOCUMENT_TOKEN_TO_BE_REPLACED