Examples of polygons inscribed in a circle.

In this post, we are going to show a special property of one inscribed polygon which is the cyclic quadrilateral theorem about angles. We are going to prove that its opposite angles add up to $latex 180 ^\circ$ 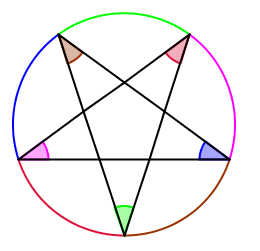 Now, notice that the five angles intercept 5 arcs which when combined is the circle. Since the measure of the all the arcs of the circle is 360 degrees, by the inscribed angle theorem, the total angles is half of that which is 180 degrees. Therefore, the angle sum of the interior angles of a pentagram is 180. END_OF_DOCUMENT_TOKEN_TO_BE_REPLACED

This is the third and the last case of the Proofs of the Inscribed Angle Theorem. In the first case, we used an auxiliary line between the sides of the angles to come up with the proof. In the second case, we drew a line segment from the center to the intersection of the circle and one of the sides to form an isosceles triangle. In this case, we cannot do both. 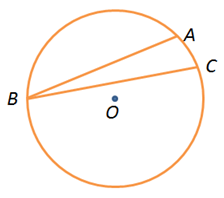 To prove the third case, we will draw an auxiliary line outside the circle.  We draw segment $latex \overline{BD}$ through the center of the circle. The detail of the proof is as follows. END_OF_DOCUMENT_TOKEN_TO_BE_REPLACED