A trapezoid is a quadrilateral whose two sides are parallel. In the figure below, $latex ABCD$ is a trapezoid and $latex AB$ is parallel to $latex CD$. In this post, we are going to prove that in a trapezoid, the consecutive angles between a pair of parallel sides are complementary. That is, we are going to prove in the figure above that $latex m \angle A = m \angle D = 180$ degrees and $latex m \angle B + m \angle C = 180$.

In a trapezoid, the consecutive angles between a pair of parallel sides are complementary.

Extend line segment $latex DA$ at $latex A$ and locate point $latex E$ on the extended part as shown above. Label the angles angles as 1 and 2. 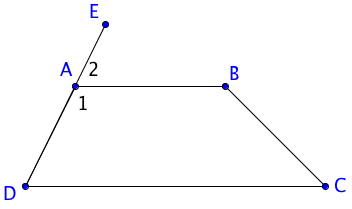