An arithmetic progression or arithmetic sequence is a sequence of numbers such that the difference between two consecutive terms is constant. The sequence

is an example of an arithmetic sequence. The first term of the sequence above is 3, the constant difference is 5, and the 6th term or the last term is 27.

In “The Sum of the First n Positive Integers,” I have mentioned that if you want to be a mathematician someday, you will have to be good at seeing patterns. The problem above can be used to test or practice your skill in recognizing patterns. You might want to stop reading and see if you can answer the problem before proceeding. 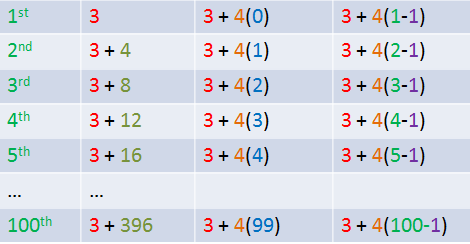 Observe in the third column in the table. Notice that the number multiplied by 4 is 1 less than the nth term.  This means that we can relate a number in the sequence to its first term, constant difference, and its nth term. This is shown in the table below. Investigate and make sense of the relationships. How is the table related to the previous table? 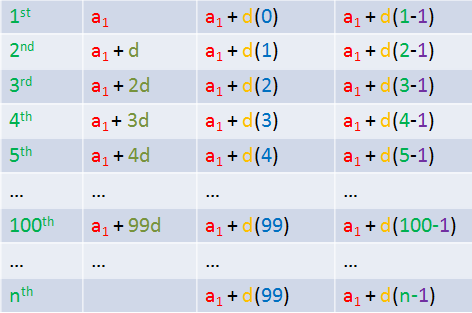 In the last column of the second table, notice that  a1 and the constant difference d and 1, appear in all the terms. The only varying quantity is n. In the last row, based on the pattern, it clear that the formula for finding an, the nth term of an arithmetic sequence is

4 thoughts on “Deriving the Formula of the Arithmetic Sequence”