An inscribed angle is formed when two secant lines intersect on a circle. It can also be formed using a secant line and a tangent line intersecting on a circle. A central angle, on the other hand, is an angle whose vertex is the center of the circle and whose sides pass through a pair of points on the circle, therefore subtending an arc. In this post, we explore the relationship between inscribed angles and central angles having the same subtended arc. The angle of the subtended arc is the same as the measure of the central angle (by definition).

In the discussion below, we prove one of the three cases of the relationship between a central angle and an inscribed angle subtending the same arc.

Let $latex T$ be an inscribed angle and $latex V$ be a central angle both subtending arc $latex SU$ as shown in the figure. Draw line $latex TV$. This forms two isosceles triangles $latex SVT$ and $latex TVU$ since two of their sides are radii of the circle. 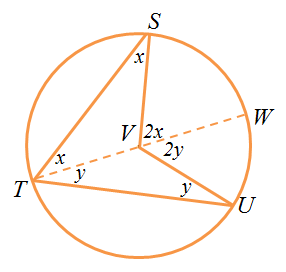 The proofs of the second and third case are left as an exercise.

Update: See the proof of the second case and third case.

4 thoughts on “The Inscribed Angle Theorem”