In high school mathematics, we were taught to write proofs in two columns. There are some proofs however that are easier to understand if we use Algebra. The triangle angle sum theorem that I have posted yesterday can be proven algebraically. Its proof which I think is easier to understand is shown below. 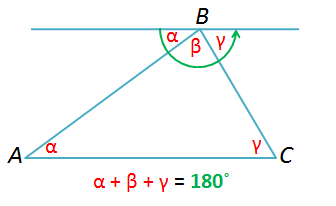