One of the most elementary concepts we have learned about triangles in Geometry is the angle sum theorem. The theorem states that the sum the three interior angles of a triangle is $latex 180^{o}$. We can easily see this by duplicating or cutting the corners of a triangle and meeting the angles at a particular point (see first figure). The adjacent angles will form a straight angle which is equal to $latex 180^{o}$. 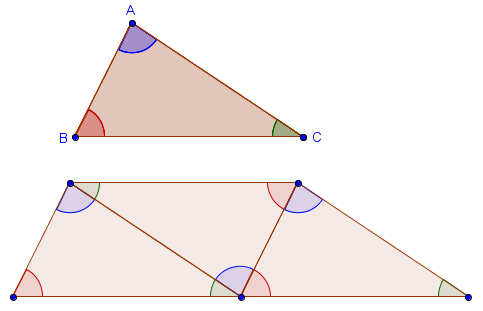 The proof of the angle sum theorem is quite easy. We just need to draw an extra line.

The interior angle sum of triangle $latex ABC$ is equal to 180˚.

Draw a line segment passing through $latex A$ and parallel to $latex BC$. This is possible because given a line and a point, you can draw exactly one line through that point parallel to the first line.

Construct points $latex D$ and $latex E$ to the left and right of $latex A$ respectively as shown in the figure below. Now $latex BC$ and $latex DE$ are parallel, so $latex AB$ and $latex AC$ can be considered as transversals.

But these three angles are also the interior angles of triangle $latex ABC$ (Can you see why?)